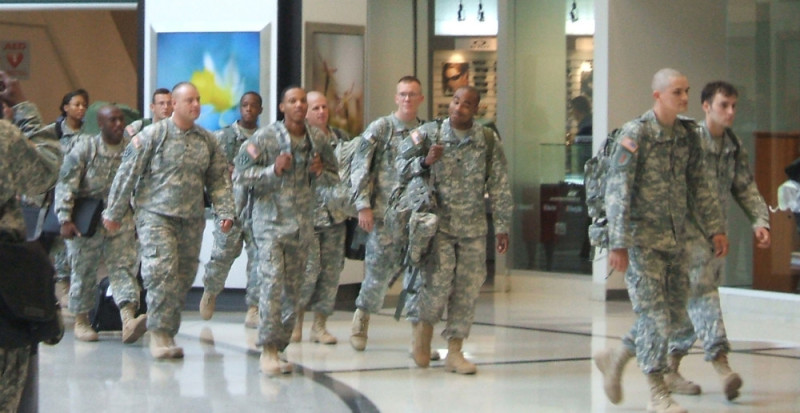 I just got back from my nephew’s graduation in Atlanta.  It went as expected except for the return trip.

In the Atlanta airport on our way home, there were reams of soldiers going through.  Twice, a column of about 200 troops went through the terminal, and literally hundreds of people put down their Big Macs, stood up and clapped as they passed.

Your heart went right into your throat when you saw how young and naive they looked.  My father was overcome, and I’m pretty sure I never saw him cry before.  But the pathos level was high among all.  Whether they were coming in or going out I do not know, but the mixture of the soldiers’ reactions was amazing.   Some chose to hold their heads high in a military bearing, others looked confused, like, is there something I don’t know?   They weren’t marching, just kind of strolling and seemed shocked by the sudden burst of applause.   Some looked embarassed, like they didn’t do anything to deserve this, but they just didn’t know, being young.   They don’t see what they’re doing in context, while all of the adults — rich or poor, Dems or  Reps — around them did, from one POV or another.   I think the population is overwhelmed by the tragedy of it all, whether the war is justified or not.   Either way, the young selflessly bear the burden, even with joy, something they might never do 10 years hence.   It’s so awful that society in a way takes advantage of their youth and innocence, but what are the choices?   I can imagine how Israelis feel, hastening their young to war with the weary wizened view that it is only done to prevent more slaughter.   Here in LA, and in my home state of New Jersey, we don’t see every day things that are part of the lives of many people in the boonies — soldiering as a normal and real part of an 18 year old’s options.