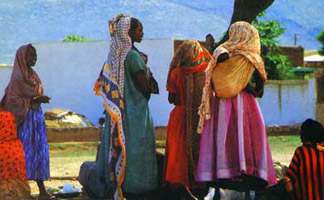 Today’s Times has done it again.  A Page 1 article about Ethiopia starts off strongly, but (don’t turn the page!) deteriorates as it goes on and on and on.  Halfway down p. A8, the author decides to get coy and parody the British colonial way of thinking, but ends up just insulting these proud people.  It’s straight news reporting all the way, until:

They saw thorny hills and thirsty people.  Even today, it is still like that.  What passes for a town is a huddle of bubble-shaped huts, the movable homes of camel-thwacking nomads who somehow survive out here.  For roads, picture Tonka truck tracks running through a sandbox.  The primary elements in this world are skin and bone and sun and rock.  And guns.  Loads of guns.

C’mon, Jeff.  Yes, the British may have seen thorns and thirst.  But you are the one who sees CAMEL-THWACKING NOMADS!  Are you kidding?  You can’t just flip tones here because you want to be creative, or fun or whatever you’re doing.  And you continue the mocking(?) pseudo-mocking(?) tone with the toy truck analogy which is equally insulting.  I would preface that comment with My powers of description have deserted me momentarily, so I’ll go all omniscient narrator on your ass, which not only distances me from my subject but diminishes it as well.

This only serves to tell the reader that when it comes to this reporter’s personal view, he is too scared or arrogant to deal with it on its face.  He suddenly telescopes back until he’s seeing little ants on the battlefield.  Whew!  What a relief!  I don’t have to process the terrible things I’ve seen.

He really nails this outlook in the final sentence when he refers to human features as “elements.”  He could have flashed his poetic license with images like metal, sun, stone, sand, nonhuman “elements” in the landscape, and been just fine.  He could have even contrasted the desperate, tired soldiers or villagers against the stark backdrop of these elements.

It’s just a quick rewrite.  Again, I blame Jeff’s editors who failed to see the desperate, tired face of their writer.