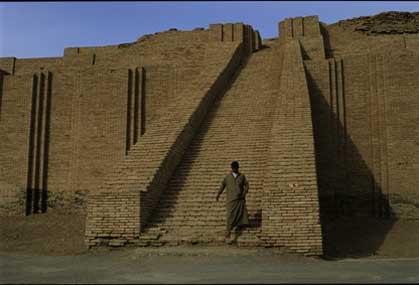 Look. I’ve been pissed lately (but I kept it to myself).

The New York Times keeps using the word “Mesopotamia” with regard to Iraq. Are they being cool-retro, as in thousands of years cool-retro? Or do they honestly not know that the place has been called “Iraq” since about the 6th Century? Or am I the dumb bell, not knowing that one of the Iraqi provinces had recently been renamed in honor of the Ancient Near Eastern empire? I had to find out.

I had last circled the June 22, 2007 front page where the Inside feature blurb stated, “But only one American soldier has died in the operations in Diyala Province, where 300 to 500 fighters for Al Qaeda in Mesopotamia are believed to be hiding.” I felt like this was the last straw, so I circled this one and tossed it on the To Do pile on my desk. Actually, my entire desk is one big To Do pile. So I finally got around to it tonight.

I went to the Times’ website and ran a search. There were lots of hits on the word, so I narrowed the date range. The first hits that didn’t seem to refer to Mesopotamia, the ancient kingdom, seemed to be coming in around 2005.

I then noticed the phrase “Al Qaeda in Mesopotamia” kept coming up, not the word in isolation or in different contexts. The NYT of October 25, 2004 was the first use I could find of this term: the abstract tells me it is the new name of a

I wanted to see if this usage was what triggered the Times’ barrage of Mesopotamias everywhere.

It took almost 8 months for the revitalized empire’s name to catch on. In fact, it turned up twice on the same day, July 10, 2005. First, it turns up as:

Representative government may, just possibly, still take hold in Mesopotamia, but neither Larry Diamond, a researcher at the Hoover Institution at Stanford University who was called by the national security adviser, Condoleezza Rice, to temporary service in Baghdad in early 2004, nor David L. Phillips, a fellow at the Council on Foreign Relations who served as an adviser to the State Department before and after the fall of Saddam Hussein, are at all optimistic.

And in the very same issue, a letter to the Editor states:

The only kind of democracy that will flower in Mesopotamia will be some variety that is native to the place and that has been patiently nurtured by local cultivators over many decades.

Okay, here we go. (Never mind that the first is a 74-word run-on sentence). Now everybody’s misusing the word. But I was wrong. These two were about the only usages to date. It has rarely been used that way again.

I grabbed the copy of the newspaper I’d saved and sure enough, it was indeed used as the name of the ugly group “Al Qaeda in Mesopotamia.” Sadly, because of the NYT standards, there is no way to call this out with either quote marks or italics. So I will probably continue to misread it and get annoyed. Here’s a case where the Times is following their traditions and I can’t fault them. Yea for following your own rules for once, but Nay for the rule itself. The ancient paper needs to find a way to clarify phrases like this in the future. J’accuse! — but in the humblest way possible this time.